Timothy (TEC) here. This month we have a guest post from a different part of the Org ecosystem, to highlight one of the most promising efforts to provide a good experience outside Emacs. 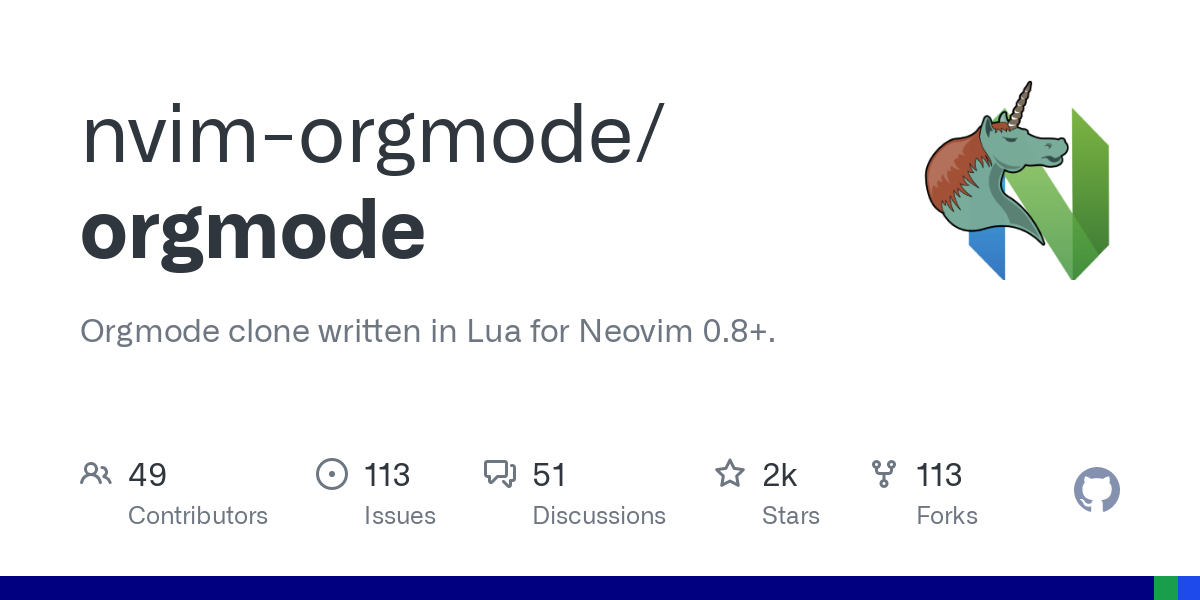 “But I use Emacs, I don’t care” you may say. In that case, I’d like to point out that wider spread and better Org support enriches the Org ecosystem as a whole. It makes the format more approachable, and useful for other people. This is good for everybody.

Without any further ado, here’s the guest post kindly written by Kristijan. Enjoy!

Like every beginner Vim user, at some point I ran into a usual editor war post: Vim vs Emacs. At that time, I didn’t have an idea what “Emacs” was.

A simple Google search yielded something that seemed just like a very simple editor with strange, but more familiar shortcuts. I didn’t bother too much to figure out what it is, because I was already pulled in fairly deep into Vim and its philosophy.

At first, I did some note taking only when really necessary, in random plain text files. Most of the things I managed to keep in my head, since I was younger and less busy 🙂.

Once I got into the situation where I needed to keep more notes, vimwiki was the natural choice.

That worked very well for a period, until the need for writing quick notes arise. Vimwiki didn’t have anything that would allow that. I could of course have a mapping that opens a specific file where I can add notes, but that just never felt right in my mind. I would keep a bunch of things in the same place, and then later I needed to spend some time organizing them.

At that point, I wasn’t sure how to achieve what I want. I did a brief look at Emacs OrgMode to see what’s all the fuss about, but to me, it seemed just like a different version of Markdown. You put some unordered lists as your notes, and that’s it. I never spent more time trying to see all the neat features. I even tried creating some of my custom note taking tools, but I never managed to finish them because I didn’t have a clear idea of how to solve my problems.

One weekend, I was browsing through Vim subreddit, as I usually do at least once a day. There was a post about an “Orgmode like task logging” plugin called vim-dotoo. I opened it up, and I didn’t see much at that point. I wasn’t too excited. I went through readme, and noticed that author (dhruvasagar) put a fairly big emphasis on the “Agenda view”. I had no idea what “Agenda view” is. Thankfully, the author also made a screencast, which is rather long (1.5h), but I had some time, so I went through it.

At that point, I was first met with “Capturing” and “Refiling”. My mind was blown! What a simple, yet extremely powerful idea! How had that never crossed my mind? From that point on, this plugin had my full attention.

I’m always emphasizing that dhruvasagar and his vim-dotoo plugin are most deserving for having inspired https://github.com/nvim-orgmode/orgmode, and I can’t thank him enough for that.

For some time, I was using vim-dotoo. I moved all of my Vimwiki notes to it. It was a breath of fresh air. Alongside that, I started getting more interest in the original Emacs Orgmode. I started noticing the differences, and some of the missing features that were now looking quite attractive. I made few contributions to vim-dotoo. As time passed, and my notes started to grow, things began being slow. I did some profiling, and figured out that it’s just a usual Vim problem, Vimscript performance. It was just too slow for certain things that Orgmode provides, and it would hardly get any better as more things are added.

Separately from Vim and Vimscript, Neovim was on a stable v0.4 release, and v0.5 was still being developed. I was using Neovim from version 0.3, and was carefully following the progress on it. Lua was introduced as a first class citizen. A Bunch of new plugins arise from it. All the benchmarks showed that Lua outperforms Vimscript in almost everything. Besides the performance, Lua is a “normal” programming language, which means that support for it is much better.

At that point, I became curious: Could Lua be the path to the faster Orgmode? I spent several days thinking about it. I wanted to give it a try. My biggest concern was that I had absolutely zero experience writing parsers. I had never written anything more complicated than an averagely complicated regex for purposes of parsing. I noticed that vim-dotoo also used regex to do the parsing, so that eased my mind a bit.

One weekend, I started working on it. It was really interesting and challenging. I spent a lot of my free time on it. At certain points, it seemed like hacking, since it was not a proper parsing. I tried to learn how to write a proper parser, but it was just too time consuming and complicated. I proceeded with the regex parsing to see how far I can go.

Besides parsing, I had a few more challenges to overcome:

Understanding the OrgMode syntax and all the functionality#

This is still the biggest challenge. I didn’t have any idea how big and robust OrgMode is. If I would know it at that time, I wouldn’t even jump on this train. It’s really hard to grasp all of it. Considering I’ve only used it for around 8 months, I think I made some good progress on learning it.

There is no built-in way to update content in another file through the Neovim API, without actually opening the file in an editor. I solved this by:

From my experience, dates are challenging in all areas of programming, so this is not so surprising. There are some Lua plugins for dates, but those seemed a bit too basic for my use case, and I wanted to keep external plugins to the minimum. I went with a custom solution that uses Lua’s native dates, which has certain limitations, but works out for most of the things.

Vim’s syntax engine is fairly old, but still very much used, especially in the Vim community. Implementation of tree-sitter slightly improved this experience in Neovim, because “Highlight matches” are found via tree-sitter, instead of a bunch of regexes.

This helped me out later for the Org file itself, but agenda view is still something that’s built as a custom view. Old Syntax highlight engine would be really hard to add, because the content is too dynamic. I went with the Neovim highlight API that allows Highlighting things by their exact position in the buffer. Tree-sitter implementation does something similar in the background for Highlighting.

Vim-dotoo configuration was mostly Vim style, through some global variables. I wanted to have a configuration that is familiar to an Emacs OrgMode user, by having as many options as possible named completely the same as in Emacs.

For example, Here’s a comparison of few options between Emacs and Neovim:

One of the most noticeable differences is between the usage of hyphens (-) and underscores (_). I did that only for the sake of simplicity, because hyphens is not a valid character in variable names in Lua, so all of the options would need to be wrapped as a string (for example: ['org-agenda-files']).

First release of orgmode.nvim and introduction of tree-sitter parser#

After ~1.5 months I published the initial version. The focus was on Agenda and capturing (GTD), since those are the things I mostly used. It got some traction, and people started testing it and reporting bugs.

One of the common questions was: “Any plans to introduce tree-sitter parser?”.

I knew about tree-sitter and used it in my day-to-day job for a few programming languages, but I had absolutely no idea how it worked, and especially how to write a tree-sitter parser. I put it aside, and continued working on what I had.

One day, Emilia (milisims) contacted me via email to ask me if I would be willing to try the tree-sitter parser she’s been working on for some time. I gladly accepted. She gave me access to the repository, and I started tinkering with it in a separate branch. No one was aware at that point that tree-sitter support would happen some time soon.

After some time, I set up a “beta” branch called “tree-sitter” and announced it for testing. Once the reported bugs slowed to a trickle, I merged it into the “master” branch.

I believe that tree-sitter grammar for Org could help out other editors to implement their version of Orgmode plugin, but I don’t think it would ever be helpful for Emacs. Emacs parser is the one and only that has it all implemented. Also, as much as tree-sitter is powerful, its main purpose is to parse programming languages, which mostly has “static” patterns to match. Orgmode is by its nature dynamic, which causes a variety of issues for a parser that’s not meant for that kind of usage.

(Neo)Vim is a great editor, but it still cannot compare to Emacs in certain things. Manipulating the “View” part of the editor is tricky or impossible for certain things.

I even made a label for reported issues where Neovim support for certain things is a blocker. I’m hoping that at least some of these will be available in future Neovim releases.

I will not go into too many details about the available features, since those can be viewed in repository readme, but I want to mention one feature that does not exist as a built/-in feature in the Emacs Orgmode: Notifications.

This allows getting a “desktop notification” for tasks that are within the specified threshold for schedule/deadline time. It requires some configuration to set up a cron job, but it’s been working great for me for several months now.

The current state of the project is very usable for me. I’m not lacking any of the major features, mostly because I’m not used to using them. Nevertheless, there are plans to add more things, and I’m getting a lot of help from the community. I want to specifically mention levouh and lukas-reineke, since they added a lot of value to the project, and I want to thank them and everyone else who contributed. Their help is much appreciated.

There are few high priority tasks that I’m hoping to flush out first:

And a long term goal for these:

When I started working on nvim-orgmode, I didn’t have a clue what I’m jumping into. Every day I learn about more and more Orgmode features that I wasn’t even aware existed.

I’m certain that this project will never manage to clone the Orgmode functionality completely, but I’m hoping it will get close enough so everyone from Neovim community and Emacsers trying out Neovim will be able to use it for their needs.

Having experienced Orgmode users testing it is a huge help, so if anyone is willing to give it a try, feel free to open up an issue and write your thoughts there. Thanks!